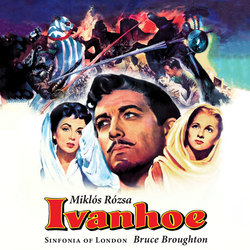 Intrada announces a new set of releases focused on high-resolution (hi-res) masters available for digital streaming and downloading. With the advent of hi-res distribution, Intrada can now offer several of its Excalibur recordings in this format. The 24-bit, 96kHz hi-res format allows for a dramatic improvement in detail and depth in the quality of music over what one can hear with the the more common 16-bit, 44.1kHz CD format. Ivanhoe, Intrada's first Excalibur release under the baton of Bruce Broughton and recorded in 1994 with the Sinfonia of London, is the first release in this new digital series. Intrada has produced the album from the unedited digital session masters made by Mike Ross-Trevor.

To commemorate this release, Intrada is also making Ivanhoe available for a limited time in a newly packaged CD. Since every release is being completely remastered with new editing, level adjustments and EQ, Intrada will also make a limited number of CDs available. While the physical discs can't exploit all the benefits of hi-res technology, listeners will still notice a marked difference between this new edition and the previous release. This CD release will only be available for 45 days and goes off sale 1/15/2021 or when supplies run out. After that, the title will live on in the hi-res digital format.

Ivanhoe is one of Rózsa's most heroic scores, composed for large orchestra, expanded percussion and brass sections and features a plethora of themes. The siege segment was such an ambitious composition that he had to record it in nine sections, all designed to be assembled into a final, two-part massive action sequence. It is perhaps one of his most complex compositions.

As noted in the liner notes by author Tony Thomas: The screenplay follows the outlines of the Sir Walter Scott novel. It begins with Wilfred of Ivanhoe (Robert Taylor) making his way home to England after serving with King Richard in the Third Crusade. Richard has been held captive by the Austrians and Ivanhoe discovers in which castle Richard is held. In England he vows to uphold Richard's cause in the face of a Norman plot to put his treacherous brother Prince John on the throne.