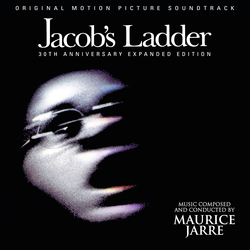 The film centers around Vietnam War veteran Jacob Singer (Tim Robbins) who is being haunted by memories of the war and the death of his son Gabe (an uncredited Macaulay Culkin). To uncover his past while suffering from a severe case of dissociation, Jacob must separate reality and life from his own dreams, delusions and perceptions of death.

Jarre's music is a fascinating journey through fear and paranoia, comprising orchestral, choral and electronic background (with an ensemble led by Michael Boddicker) with contributions from instruments such as the duduk and shakuhachi as well as percussive effects. This score is among his most imaginative, claustrophobic and paranoid efforts—one that has developed a cult following.

Varčse Sarabande released the score in 1990, presenting it in five long suites prepared by the composer himself. As was common in his own concept albums during the '80s and '90s, these suites were not necessarily chronological and included some alternate mixes that were different from those heard in the film. From the albums prepared by Jarre in that period, Jacob's Ladder was especially brilliant in presenting a harrowing horror trip. However, some relevant parts of the score were left out of the album presentation, so now we are glad to present two different approaches to this fascinating musical universe. Disc 1 offers the original album completely remastered, while Disc 2 presents the film score in chronological order, including cues not used in the final cut as well as alternate mixes.