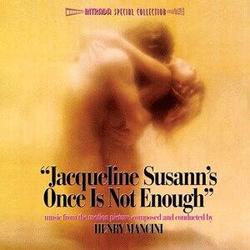 Jacqueline Susann's Once Is Not Enough

Intrada announces the premiere release of Henry Mancini's score to the 1975 film Once is Not Enough—what is probably Mancini's most "sixties" sounding score of the seventies. It is rich in both warm and sad melody, chock full of striking combo and big band source cues surely to linger long after the disc stops playing. Fashioning one of his most beautiful main themes, as well as an equally haunting melody for the tender/tragic character of January, the score centers on two primary themes representing the dueling sides of January's love life. Set against the gleaming gold of an Oscar statuette, the score opens with a theme that sparkles and shimmers with lush strings underscored by sweeping harp glissandi, synthesizer swells and a tinkling bell-like figure, setting the stage for the rest of this rare Mancini gem to follow.

For this premiere release, Intrada had access to the 2" 16-track session masters vaulted by Paramount in pristine condition.