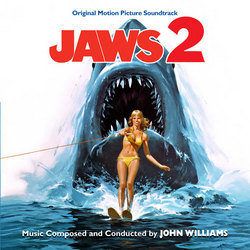 When John Williams composed the original score to Jaws, he created one of the most famous and instantly recognizable motifs ever composed for the cinema, winning for Williams both an Oscar and a Grammy. While Williams could hardly compose a new Jaws score without incorporating his classic shark motif, he composed an all new score, larger in scale than the first. Aside from a brief quote of the Orca theme during the main title sequence, the wealth of new material for the score is dominated by two new principal themes.

The original MCA album released at the time of the film was assembled from various shorter cues for reasons of musicality rather than exact chronology. resulting in an exciting, creatively thought out album. In preparing this set with the cues appearing in their original film order, Intrada noted that those 1978 album assemblies deleted bars of music to accommodate joining two or three otherwise unrelated cues together to form the longer album tracks. This new score presentation was assembled and mastered by Mike Matessino from the original 3-track session master, stored in great condition at Universal, and approved by the composer. Williams' original MCA Records album program, long out-of-print on CD, is included on a second disc.