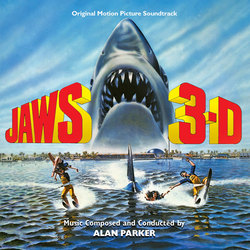 For this latest edition in the Intrada Special Collection, Intrada has revisited an earlier Special Collection release—Alan Parker's score to Jaws 3-D—and remixed and reassembled the entire score for this 2-CD set. Although Jaws 3-D was Parker's his first feature film assignment, he delivered an exciting and sometimes even romantic score, being the first Jaws score to feature a love theme. It is a rousing mixture of his own original material and the world-famous John Williams theme. Like Williams' Jaws 2, it frequently takes a high-spirited approach, emphasizing the fun nature of the Sea World setting, with the main title featuring both the shark theme and a rousing motif for the water-skiers.

Parker composed and conducted enough music for two pictures. He made numerous rewrites and often recorded two different versions of his cues, recording one version at a given session, then making significant changes that altered not only the timing but the tone and intensity of the cue involved and recording the new version during another session. In the final cut, almost all of Parker's cues are truncated, with a large portion of them being used in places for which they were not originally intended. For this release Intrada was provided with all the original 1" eight-channel scoring session masters of every cue; the Ż" 15 ips Dolby A-encoded three-channel stereo mixes of all of the rewrites, overlays, stingers and other short bits; and the 1/4" 15 ips Dolby A-encoded two-track stereo mixes of the source cues—everything that was recorded in London between late April and mid-June of 1983.