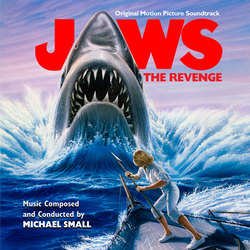 In 1987, Universal Pictures presented the fourth and final installment in the Jaws series—Jaws: The Revenge—this time with Michael Small along to provide the musical thrills.

MCA Records announced a soundtrack LP at the time of the film's opening, but after the box office proved disappointing the LP was canceled. Now Intrada has rectified the score's absence on CD with this premiere release of the complete score. Small blended the original shark theme by John Williams with a considerable amount of newly composed music.

Small begins his score with his own adaptation of Williams' classic theme, a particularly fierce rendition adding a musical sound effect like a monstrous roar. Ellen Brody is the principal character now, and Small gives her a strong, emotional main theme, played in more delicate versions early in the score but heard in a forceful rendition at the story's turning point, when she heads out to take on the shark by herself. Small also supplies a taunting, repetitive motif to suggest Ellen's growing obsession with the shark, suggesting an unseen, menacing force just out of view. He closes the score on an end title featuring a vigorous version of the Williams theme, which brings the Jaws scores full circle.

Much of the new music by Small ended up on the cutting room floor and several cues were dialed out before completion. Still others were simply re-tracked into scenes for which they weren't originally intended. Intrada was given access to the complete 1/4" 15 ips two-track stereo session mixes vaulted by Universal Pictures in pristine condition. These master elements not only allowed Intrada to present every cue in the manner recorded by Small but also to include alternate print takes of several cues.