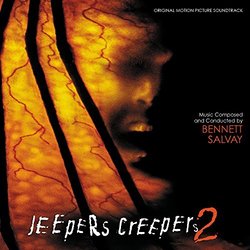 It is rare that a horror movie can make me uncomfortable like the Jeepers Creepers movies do. They are less like a slasher film or a monster movie and more like a campfire tale. Jeepers Creepers 2  is less personable than the first film, but it is made with the same sneaky intelligence. The movie isn't really scary as much as it is tense and funny in the school of the early Steven Spielberg films. If Jeepers Creepers 1 was Duel, then Jeepers Creepers 2 is Jaws.

Bennett Salvay continues to develop the musical sound he created for Jeepers 1 and broadens his scope. This is an old-fashion orchestral monster movie score, which Salvay relishes in.  It is not profoundly different from the first score but is simply a bigger version of it. The score to the first film was only released on CD in limited numbers and thus quickly went out of print. So this will be the first chance for many to listen to his music.

While the first score of the film was mostly establishing a brooding atmosphere with well timed blasts of orchestra shocks, this is a series of non-stop action/horror cues. There is no light in this score. Only brooding portents of doom, melancholy and running for your life. To think, this is the same composer that wrote the "Everywhere you Look" theme for "Full House".

The first half of the score is the more tradition atmospheric music of the first film. The Creeper theme returns in brief reprises through out numerous cues, hinting at the ancient, ageless evil. Salvay uses the wailing brass, sustained chords that stretch out to uncomfortable lengths. There were "shocks" that even made me jump while typing this.

Where Salvay really stretches his legs is in his new themes. Salvay gets to write a lively action theme for Taggart (Ray Wise), the father of an early victim of the Creeper. It first plays in "Taggarts Prepare" then emerges full force in "The Big Battle." It feels very much inspired by "The Shark Cage Fugue" from Jaws.   "Mixie's Dream #1 &# 2" are sequences that show off his skill at the dreamy atonal chords that Cliff Martinez has been specializing in as of late.

Salvay is a bit weaker at action. The cues that take up the score from "Brain Flossing" through "The Creeper Hops Among Us" are overall fairly repetitive action affair with racing strings doing counterpoint with pounding horns and occasional African drums. For a piece or two they are exciting, especially when Salvay hits his grand monster movie moments in "Field Chase" and "The Big Battle." But the pieces soon blur together in the listening.

Luckily Salvay is back on target with "Stabbing/End of Days", "Creeper on the Cross" and the "End Titles" which is a suite of the films themes that gets back to the core of this mean little dark movie's soul.