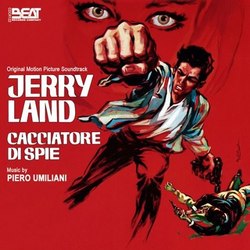 This month our flip-cover CD is dedicated to the mythical Tuscan-born, Roman-adopted Maestro Piero Umiliani and his wonderful score for the 1966 spy caper Jerry Land – Cacciatore di spie (Man on a Flying Trapeze) by Spanish director Juan de Orduńa. The movie starred Wayde Preston, Helga Sommerfeld and Reinhard Kolldehoff and followed the trail of the dynamite success of the Bond movies scored by one of the most talented Maestros of that genre.

A previously-unreleased score that can easily be considered a point of reference to the style with which the Maestro was at ease during that magical '60s decade, it features more than 44 minutes of music in good quality mono. Chases, tension, action, great symphonic sonorities and jazz stylings—put it in the viewfinder and press play!

The CD is packaged in a jewel case, with mastering by Enrico De Gemini, graphic layout by Daniele De Gemini, flip cover with Italian and Spanish posters, and liner notes on the music and film and a biography on the director Juan de Orduńa by Fabio Babini.