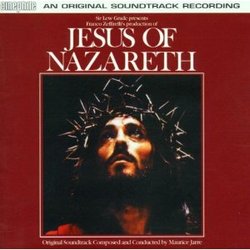 In 1977, Sir Lew Grade and acclaimed Italian director Franco Zeffirelli (Romeo And Juliet, the wonderful Mel Gibson Hamlet) were in the midst of finishing their sprawling six-hour miniseries about the life of Christ when they turned to veteran composer Maurice Jarre for the musical chores. While Jarre apparently had his reservations about doing work for television, in this case his fears turned out to be unjustified. With an all-star cast, exotic locations that spanned the globe, and most importantly the type of budget that could afford the kind of epic score Jarre had in mind, many still consider Jesus Of Nazareth to be one of the definitive filmic depictions of the J-man to date. Quite a feat, considering that the Guinness Book Of World Records calls Jesus the single most portrayed character in the history of cinema.

That kind of notoriety no doubt brings a special brand of pressure to any composer, even the widely-lauded Jarre. How does one define music for the divine, while trying to avoid the myriad musical clichés, both bad and good, of the Biblical epics of Hollywood's Golden Age? (Answer: carefully. Sorry, bad joke.) As represented on Castle Communications forty-minute score CD, Jarre's approach is to stick to what he does best: a huge orchestral work that is alternately majestic and quietly intimate. Jarre's inimitable style is on glorious display here, with urgent brass fanfares and powerful percussion work, as well as elegiac and subdued string passages. Fans of everything from Lawrence Of Arabia to Mad Max Beyond Thunderdome will find something to enjoy here.

In the self-titled overture "Jesus Of Nazareth", Jarre paints his canvas as wide as possible, starting with violent percussion that presages the later "Crucifixion" and then moving to a reverential string motif for Jesus himself. In "Annunciation", Jarre chooses to depict the spiritual proceedings not with any requisite heavenly voices, but rather the otherworldly strains of soloist Monique Matagne's Ondes Martenot.

"Three Kings" is a big highlight, with exotic hammered strings and a haunting misterioso theme that really sticks with you, though it doesn't pop up again anywhere else on the album. Also worth noting are "Jerusalem", a solemn and introspective hymn for strings that gives way to "Salome", a dance for woodwinds and light percussion that really lives up to its name, slowly working itself into a maddened frenzy.

The rest of the album develops nicely, from the terror of the aforementioned "Crucifixion" to the power of "Resurrection". The only hiccup of-sorts here might be "Beatitudes", which features the voice of Christ himself, as depicted by actor Robert Powell, on top of the music. While Powell's reading is admittedly strong, it is also intrusive and out of place so late in the game. (As an aside, Powell also sounds unsettlingly like Peter O'Toole. I dunno, maybe it's Jarre's music underneath him. I think I need to get out more often.)

The sound is a bit thin in places, no doubt due to the age of the source materials, but still very acceptable. The fold-out liner notes are colorful and extremely informative, including a note from director Zeffireli, a detailed analysis of the score by Geoff Leonard, Pete Walker and James Fitzpatrick, as well as a wonderfully dishy recounting of the production's history. Altogether, what you've got here is a bang-up soundtrack that is a must-have for Jarre fans and very highly recommended to everyone else.