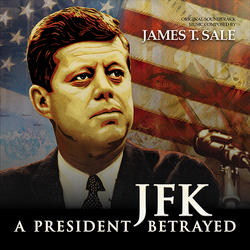 MovieScore Media takes a trip to the past by releasing the original score for JFK: A President Betrayed, one of the several documentaries produced about the legendary president upon the 50th anniversary of his assassination.

The score for JFK: A President Betrayed offers an imaginative tapestry for Cold War politics that doesn't shy away from recasting the key players as expressed in tracks like the reflective cue for "JFK" or the ominously percussive music for "Introducing Castro."