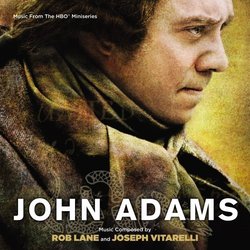 In 2002, David McCullough\'s riveting book John Adams was awarded the Pulitzer prize for biography. In 2008, the Playtone/HBO miniseries based on McCullough\'s biography and bearing the same name won the Emmy award for Outstanding Miniseries along with seven other awards. Both book and miniseries were praised for their attention to detail and their ability to put the reader and viewer in Colonial American; more than once critic\'s espoused that John Adams presented life the way it actually was.

Unfortunately, the producers and directors neglected to demand the same level of verisimilitude from the score for John Adams, ably written by television and miniseries veterans Rob Lane and Joseph Vitarelli. As they have shown in the past, both men understand the demands of television scoring and write beautiful music, but in this case, their music undercuts the drama and intrudes upon the listener when it should recede into the background.

As a production, John Adams was obsessed with factual accuracy – evening scenes are lit with candle light; streets are muddy; men and women have missing teeth, do not wear make-up, and have difficulty with their clothing and wigs. The level of detail that obviously went into production design creates a space for the actors to inhabit that must have aided their uniformly remarkable performances. When the music was added after filming, it would have been logical for historical accuracy to be demanded of the score as well. Instead, conventional scoring techniques were adopted so we have scenes that visually strike us as true to life in the 1770s accompanied by an orchestra in a form first found almost 100 years later playing harmonies common over 120 years later. This inaccuracy may seem a small point to quibble, but is not as the music consistently makes its odd presence felt and undermines the work done by others involved. It takes a viewer out of the scene by calling attention to itself, something a score should almost never do.

With that caveat presented, there are a few beautiful moments in the score that do work, and work well. Two scenes immediately come to mind in this regard: First is the signing and eventual presentation of \"The Declaration of Independence.\" The scene builds to a stirring climax in which the Declaration is read to an assembled throng on the steps of Independence Hall. Rob Lane begins his cue softly with strings, adding a wooden flute playing the miniseries\' main theme. Halfway through the cue, he takes his low strings and has them begin an upward-moving pattern that creeps its way up the orchestra\'s tessitura (if you have heard the first movement of Gorecki\'s Third Symphony, you will recognize this technique). As the film\'s oration builds, the musical texture and rhythm build as well, until military percussion enters and you are overwhelmed by the sound. It would be hard to not have goosebumps after seeing and hearing this scene. Second is the \"Hot Air Balloon\" cue by Joseph Vitarelli. Adams, his wife Abigail, and Thomas Jefferson are in Paris following the American Revolution and gather outside to see the first hot air balloon lift off, taking humankind\'s aspirations off Earth\'s bounds for the first time. As the camera pans up to capture the wonder expressed on every assembled face, the string orchestra buoyed by woodwinds and harp floats upward, never resolving and never finding rest. It is a lovely moment, and an example of when it useful for music to intrude on the drama as this music lifts its hearers bodily along with the visual of the ascending balloon.

Unfortunately these moments are few and far between over the course of eight and a half hours of miniseries. Separately, the music serves as fine, lush background music, but when combined with the miniseries, does not consistently fulfill its function. While the music is enjoyable, I cannot give it a strong recommendation.