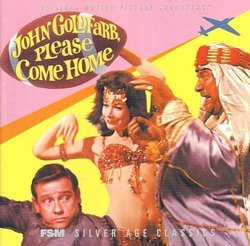 Film Score Monthly has been doing an amazing job releasing older, somewhat obscure scores by our favorite contemporary film composers.  Some of them might make you scratch your head, but others are true diamonds in the rough.  One such gem is John Goldfarb, Please Come Home! - a silly movie with an equally silly - but completely enjoyable - score by maestro John ("Johnny") Williams.  The film, made in 1964, concerns John Goldfarb, a U-2 pilot shot down over a fictional Arabian country.  The Arabs threaten to send Goldfarb to the Soviet Union unless he can coach their football team.  Antics ensue.  Williams' score is a mix of Middle Eastern motifs and 1960's cheese, with a hint of future greatness.

The "Main Title" song should set the tone for the whole album - it's upbeat and fun, with a 1960's groove to it.  Some of the underscore is distinctly Williams: "Our Hero's Flight" has military percussion and brass that would become so familiar in his later films and "Sleeping with Asps" has a tender lushness to it that is also overtly familiar sounding.  There are cues that sound Middle Eastern ("The Red Sea", "The Ladies Enter"), and others that have a jazzy quality to them ("Mandy Tells", "Samir's Fate").  Even some farcical Keystone Kops action takes place, in the end of "Iceberg Melts" and "Wrong Way Lawrence". A rather interesting track is "King Fawz Feast", which concludes with a Middle Eastern rendition of the Notre Dame Victory March!

There is a love theme to this score, first heard in "Iceberg Melts", is a tender melody consisting of flute over strings with harp.  It shows up only twice more in the score: "Sleeping with Asps" and "Jenny and Goldfarb".  Also included is a huge section of bonus tracks.  With two alternate versions of the "Main Title" (with varying lyrics), and a third unused version of "Original Main Title" (not as upbeat and chipper), the section is rounded out by bits of pre-recorded tracks or snippets that couldn't really fit well into the album's sequence.  Overall, it's a good solid effort, and plenty of stuff to listen to.

John Goldfarb, Please Come Home! was not a successful film.  However, Film Score Monthly has done the film some justice by bringing this John Williams score to light.  At times on this album, Williams feels stuck in "television mode", but there are certainly glimpses of things to come.  It's cheesy, slinky, dated and corny - yet it's a complete unabashed pleasure to listen to, and would have to be one of the "guilty pleasure" albums of 2001.