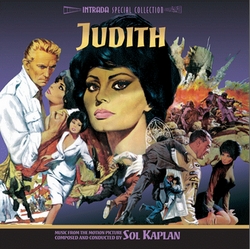 The 1965 Paramount film Judith gave composer Sol Kaplan a rare opportunity to score a big-budget epic. The Spy Who Came in From the Cold, scored the same year, was an espionage thriller who's chilly realism had called for a spare, bleakly moody score. In striking contrast, Judith's bold melodrama required something big, which Kaplan handily provided. His robust score, performed by the Sinfonia of London, features two primary themes: a powerful, anthem-like theme for Judith, and a hora—a traditional Israeli folk dance— for the kibbutz and its people.

RCA Victor released a re-recorded LP album of Judith featuring 38 minutes of music, a fairly generous presentation for the period (sourced here from 1/4" stereo tape album masters and presented on disc two). But Kaplan recorded well over an hour of music for the film and this Intrada presentation of the score (courtesy 1/4" mono tapes from the Kaplan Collection at the University of Wyoming and featured on disc 1) reveals the composition's full scope and variety for the first time.