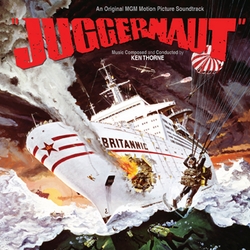 The scores for both films were written by Lester's frequent musical collaborator, Ken Thorne. Thorne's score for Juggernaut is very brief but very effective – it is filled with tension, has some great action scoring when the bomb squad is parachuting aboard the Brittanic, and his music heightens every scene in which it's used. There's also a very pretty theme to accompany scenes with Shirley Knight and Omar Sharif, but mostly his music plays the same cat and mouse game that the characters play. Thorne's score for The Bed Sitting Room is the polar opposite of Juggernaut – whimsical, jaunty, rueful, and filled with one great melody after another. Thorne was really adept at writing comedy scores, in a way that few composers are. And he especially had an affinity for complimenting Lester's visuals.

The source material for both scores came from Mr. Thorne's personal tapes. For Juggernaut, those tapes had the entire brief score, save for one cue, the end titles. We were able to take most of that from the DVD (there is a tiny bit of sound effects – ocean noise – for the first few seconds). The Bed Sitting Room is quite a long score, but Mr. Thorne only had highlights from it on a reel, and we've included everything he had, as no tapes from either film were in the MGM vault.