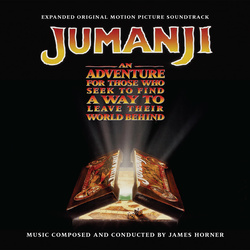 Intrada's latest release from composer James Horner is a 2-CD set of his wild 1995 score for Tri-Star's Jumanji. 1995 was a busy year for Horner, having composed Braveheart, Casper, Apollo 13, Jade and Balto in addition to Jumanji. Directed by Joe Johnston, the film continued the collaboration with Horner, who also scored his films Honey, I Shrunk the Kids, The Rocketeer and The Pagemaster. Horner marshals large orchestral forces for Jumanji for his leitmotif-driven score, augmented by synthesizers and a selection of ethnic instruments, chief among these are two flutes, shakuhachi and quena, used to very different effects.The former is a traditional Japanese bamboo flute that Horner deployed in many of his scores—though rarely as aptly as in Jumanji, where its breathy, guttural tones transform the instrument into a veritable jungle beast. On the other end of the emotional spectrum, the quena (or kena) is a South American wood flute from the Andes region, usually performed with florid vibrato. Its timbre has an idyllic quality and creates islands of tranquility within the score.

Sony Pictures vaulted the complete 6-channel scoring session masters for Jumanji, with three channels devoted to the orchestra mixes and three channels assigned to the sweeteners and electronics. Although their textures and effects are important in select sequences of the score, Horner kept them to a minimum, preferring to emphasize the colors of his large orchestra. The master elements were transferred at 24bit 96kHz with the six channels of audio combined into the vivid final composite two-channel stereo mix made by Shawn Murphy at the Todd-AO Scoring Stage. The complete score appears on disc 1, with disc 2 featuring a remastered original 1995 soundtrack album, produced by the composer with some exclusive takes and edits.