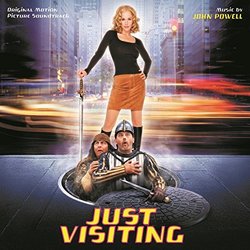 While working at a company housed in the Lantana Building in Santa Monica, I kept passing by a suite of rooms devoted to post-production on a Gaumont-produced film called The Visitor.  As it turns out, it was the English-language remake of the 1993 French hit Les Visiteurs.  Starring Jean Reno as a medieval French knight who (along with his serf) has been whisked away (via a sorcerer) to modern Chicago (accidentally), Just Visiting contained an appropriately medieval themed score by John Powell (and a few others).

Beginning with an optimistic, thematically heavy cue, "Thibault Goes To England", Powell's distinctive style is immediately recognizable.  Mixing strings, orchestra, choir, and a bit of percussion.  There are moments of classical influence, most notably in the string work, which about halfway suddenly take a turn towards Gladiator.  The obvious comparisons aside though, the cue is rather exciting, and a good taste of the score on the album.  Powell has always had a knack for themes, and this score is loaded with them.

The cue "To Chicago" features a more mystical edge to it - no doubt some magic is at work here.  Again, the use of choir is prominent throughout the score, and adds a real large sense of power to it.  But don't let that fool you - there are some softer moments.  The use of acoustic guitar mixed with orchestra works wonderfully, and even a more whimsical cue like "Tub For Two" (featuring whistling, guitar, and percussion) doesn't seem completely out of place.

Nick Glennie-Smith, James McKee Smith, and Geoff Zanelli scored additional music on this album, but you wouldn't know that unless you were told - it really does hold together.  If I had to sum it up in a few words, I would say it was Antz meets Chicken Run meets Gladiator.  The album is capped off with a pop song "Your Time Will Come" that didn't really seem to fit, but upon further examination, I discovered that it was because it's more of a club-dance mix song, and that's what bugged me.  But it actually uses themes from the film, and was co-written by Powell with Gavin Greenaway and Jeff Pescetto (a few other Media Ventures buddies).  The song works on it's own; just not with the rest of the music.  (And yet it does thematically, which makes it so strange.)  Running about 36-minutes long, Just Visiting is a rather enjoyable album that I think you'll get a kick out of if you can overlook the debt it owes to Gladiator, and deal with the complete change of style with the pop song at the end.