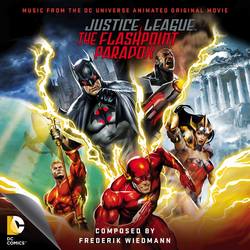 Finally budgeted to work with an orchestra , Wiedmann brings his distinct epic scoring abilities to one of DC comics' most jaw dropping stories in recent memory. If you are a fan of Wiedmann's grand compositions in Green Lantern: The Animated Series you do NOT want to miss this score! Eye catching art design by Dan Goldwasser features notes by composer and filmmakers.