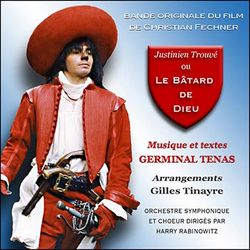 Despite the unusual length of Justinien Trouve, ou le batard de Dieu(160 minutes) and the absence of big name stars, the movie should have attracted a large audience. It was not the case because of a lack of advertising and unfavorable press coverage. Many critics welcomed the work of Fechner as a manifestation of pretentious megalomania.

Today, thanks to the Internet, it has come out of the shadows, much like Germinal Tenas' music, which we present here in a newly remastered version. Among the performers, one can notice many renowned soloists in the field of traditional European music, while the symphonic parts were recorded at CTS Studios in England, with the participation of 80 musicians and 60 choristers.

The success of this unusual score, which draws on sources from the Middle Ages and the Renaissance with an electronic sounds contribution, is obviously due to the talent of the composer and his arranger, but it also reflects Germinal Tenas' other personal qualities. This man was able to communicate his passion and enthusiasm to his numerous collaborators. Musicians, singers and conductor as well as technicians; everybody seems to have delivered the best of themselves to make this soundtrack a true masterpiece.

The lavish 20-page color booklet has liner notes in French and English. This de luxe 350 copies limited edition is licensed by Studiocanal.