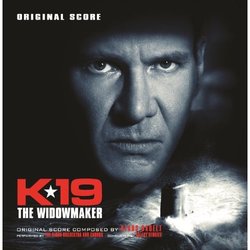 Performed by
The Kirov Orchestra and Chorus

One wonders why a studio would release a movie like K-19: The Widowmaker in theaters during the summer blockbuster season.  Although it's a tense, suspenseful thriller, K-19 is anything but typical summer fare.  The story of a Russian nuclear sub on its doomed maiden voyage during the height of the cold war would have been better suited for release in the spring or the fall regardless of the name actors on board, Harrison Ford and Liam Neeson.  Not surprisingly, the film died a quick death at the box-office.  This is not to say the film was bad - on the contrary.  Under the cool, sure-handed direction of Kathryn Bigelow and the fine performances of its leads, it far surpassed my expectations.

Contributing to this somber tale is Klaus Badelt's excellent score.   Badelt, known for his work with Hans Zimmer, conjures up the ghosts of the Russian composers of old.   If, at times, it seems like a stand-alone piece, that's because it is.  His main suite for the film is broken up into four movements.  This piece was further broken down, re-arranged, and edited into the movie.  As such, when listening to the first four tracks on the CD, it really does seem as if you're listening to a traditional piece of classical music.   While screen specific action cues are noticeably absent, Badelt has opted to take another course, one of honest emotion to the story's events and themes.  If there's a misstep in the Suite (and the album as a whole), it's the third part, "War".  Sounding too much like a typical Media Ventures brass-heavy, action cue, it sounds a bit out of place with the rest of the music.  It's understandable that the film would call for such a cue; one simply wishes it didn't sound so similar to Badelt's past work on films like Gladiator.

The 12-minute long "Journey" is just that.   Beginning with variations on the main theme, it segues into a rousing and patriotic chorus accompanying the boat as it sets out to sea.  The grand seafaring music continues until the conflict between the two captains becomes more pronounced.   With faint traces of percussion in the background, ominous brass and strings bring the tempo to a crawl as the tensions between the two begin to grow and the seeds of distrust are planted.  Dissonant percussion ends the cue signaling the battle of wills that will come later.

Brief but effective, "Capt Alexi Vostrikov" introduces us to Harrison Ford's character.  It's mostly Russian military brawn and appropriately suggests elephantine resolve.  "Missile Launch - Rescue" slowly builds up to a mild crescendo before segueing into the main theme.  This somewhat underwhelming action cue is appropriate for the film because of its somber tone.  As Capt Vostrikov pushes the crew to their limits, the men live up to the test but their actions are devoid of any grand heroics.

The real heroes of the film are the ones who sacrifice themselves with quiet resolve.  "Reactor" is their cue, and it's based on selections from "Visions of Light".  This piece consists of cues originally composed by Richard Einhorn for the silent film, The Passion of Joan of Arc.  Using it as a temp track, it was re-arranged by Walter Murch during editing, and then re-recorded again by Badelt.  The result is haunting music that accompanies the courageous crewmembers as they willingly expose themselves to high doses of radiation in order to repair the sub's nuclear reactor.  Beginning with the ominous tolling of a distant bell, the piece segues into a solemn female choir.  Not surprisingly, it's a cue infused with a heavy dose of solemn dread and quiet stoicism.

Without going for the obvious, Badelt conveys the inner courage these men possessed in not only doing their duty but also sacrificing themselves for the greater good.  Although imbued with fatalistic dread, there is an underlying current of hope and honor in his score.  These complex emotions aren't easy to convey, and, much to Badelt's credit, he forgoes the easy surface simplicity and opts to delve much deeper.

If movies are seasonal, it would be fair to say that some music is seasonal as well.  There are certain types of music that are just right for summertime listening and others which are better suited for the dark days of fall.  Badelt's score falls in the latter category.  He's composed an excellent score to a somber movie, and, as such, it isn't necessarily great summertime listening.  Wait another month before popping it in your CD player.  Highly recommended.