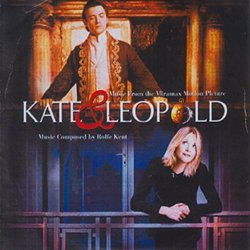 Kate & Leopold is a whimsical romantic comedy starring the attractive Meg Ryan and the exceptional Hugh Jackman which is most striking in how un-striking it is.  Similarly, the music is nice and pleasant, but almost completely uninspired.  The film tells the story of a disenchanted dilettante who accidentally follows a time traveler from 1876 New York to present-day New York.  The young American noble, played by Jackman, falls in love with the traveler (Live Schreiber)'s former girlfriend and neighbor, Meg Ryan.  This is a sweet, light story that is certainly enjoyable enough, but never exceptional.  As a romance, it is simple and inoffensive, but as a story, it feels like everything is glossed over.  You get just enough information to tell a semblance of a story, but nothing more - and in so doing, it becomes unsatisfying.  We soon can predict every turn the story takes, and the end seems completely like a foregone conclusion.

In the same way, the soundtrack is a completely enjoyable score that lacks any real personality.  The score's composer Rolfe Kent is no slouch, and each piece is well-crafted and sets a good tone of both whimsy and intrigue.  Moreover, he evokes a period feel while still keeping the music intriguing to a modern audience.  In addition, to the score, the soundtrack includes the Oscar-nominated song "Until", performed by Sting, which adds a nice light touch.

That being said, nothing about the music is overly unique or memorable.  You don't come away from it humming the Kate & Leopold theme.  To be fair, Kent is clearly limited by the film.  Every step of the way, the filmmakers play it safe, so for him to go out on a limb would seem incongruous.  Having said that, he could have added some stronger, more unique emotional threads that would make the overall film have more weight than a feather.  Also, Sting's piece is definitely phoned in - it has none of the flare or style that we associate with the rock icon.

Basically, the only folks who will like this soundtrack are die-hard fans of the movie who want to re-live the film, even though the music is not terribly evocative.  Otherwise, save your $15 for something a little less vanilla and a little more fun and interesting.