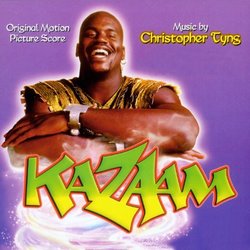 It's a natural move from basketball to acting; I'm sure it's been done several times. Michael Jordan did it in Space Jam, after all; how hard could it be? The difference with Shaq's first big role (if we don't count Blue Chips) is that he ventured out of a league that Jordan wisely stayed in—playing himself. Instead, Shaq plays a larger-than-life genie.

Well, it's not my job to dispense sarcastic commentary on films that I'd rather not see; rather, it is my job to review their scores, and so here goes. Kazaam is really not very good. A simple description, perhaps, but rather apt. A lot of what we get is random-sounding synthesized "ambience," presumably, to tell us that a genie is present. Also featured are a bit of sentimentality—which is almost always scored for piano, isn't it?—and a laughably bad piece of music in "Bike Chase," whose drums, screaming guitars, and orchestra sound like a (very) poor man's Hans Zimmer cue.

The biggest surprise on the album, though, is that after about twenty-five minutes of utter dreck, "The Transformation" turns out to be fairly decent. It's about the only coherent use of orchestra, synths, and choir on the disc, and if not outstanding, these five minutes are certainly rather pleasant. Is it worth the price or the trouble of getting this promo, though? Not in my opinion.