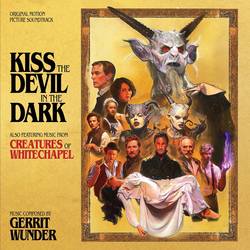 Kiss the Devil in the Dark / Creatures of Whitechapel

ScreamWorks Records opens 2017 with the CD premiere of two its digital releases by composer Gerrit Wunder. Written and directed by Jonathan & Rebecca Martin, both Kiss the Devil in the Dark and Creatures of Whitechapel are inventive fantasy/horror shorts with darkly Gothic scores steeped in rich symphonic themes.

"Director Jonathan Martin has a very clear vision for his movies" explains the composer about how he approached the film. "Regarding the score, his philosophy is that he wants to see the whole movie in front of his eyes when just listening to the music. That is why I compose wall to wall music for his films. It's almost like an opera. Most characters have their themes and motives so you'll be able to find a very Wagnerian leitmotif-technique approach in this score. In fact I think Jonathan would have preferred to hire Wagner himself, so he ended up with me, at least Wagner and I share the same mother tongue."

"Scoring Creatures of Whitechapel was a very unique experience due to the fact that I had to score wall to wall orchestral music for this short film" explains the composer about how he approached the film. "It felt more intense than many of the feature films I have worked on in the past. Director Jonathan Martin's motto is "I like it big" and so I try to support the characters and their journey using Wagnerian leitmotif techniques combined with big and rich orchestrations. I hope this score will be enjoyable to listen to by fans of dark and big orchestral film music.