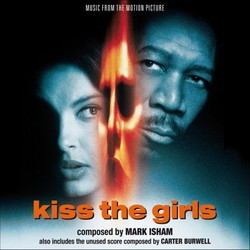 Mark Isham contributed a striking dramatic work, using a mix of electronics and conventional orchestra—one that underscores the pulsating nature of the story while incorporating a darkly romantic undercurrent. But Isham's score for Kiss the Girls was not the only music written for the picture. Originally, acclaimed composer Carter Burwell had been signed to score the film, and his fully recorded, unused score makes its debut here.

The complete Isham score appears on Discs One and Two of this release; we have also included the 30-minute suite selected by the composer for the original album released by Milan Records in 1997. The complete Burwell score appears on Disc Three. Both scores are presented in stereo from pristine-condition digital scoring session mixes courtesy Paramount Pictures. The elegant, 24-page full-color booklet includes exclusive liner notes written by Andy Dursin.