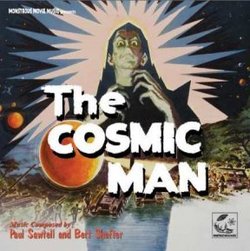 This is the first 2-CD set from Monstrous Movie Music, and we couldn't think of a better two-disc release than one featuring the science fiction music of that classic composing team of Paul Sawtell and Bert Shefter (The Fly, Jack the Giant Killer, It! The Terror From Beyond Space).

This album features one of the great monster scores of the fifties, that being 1957's Kronos. The giant-robot-from-space movie is one of the most requested sci-fi soundtracks, and we are proud to offer it in its entirety!

From atmospheric passages highlighting the incredible sounds of the electric violin to brassy and percussion-rich cues that capture the essence of the metallic behemoth, this 50-minute score is destined to be one of your favorite monster scores of the era. This release features the original monophonic soundtrack taken from the composers' master tapes.

While 1959's The Cosmic Man is by no means a great motion picture, and even calling it a minor motion picture is a bit of a stretch, Sawtell and Shefter obviously knew they had to be creative to give the film a musical coating to bring out all the atmosphere and mystery that the movie itself failed to generate. Although recorded with a small orchestra, The Cosmic Man's music shows the composers' ingenuity by using all sorts of devices and orchestration to add the requisite sci-fi flavor to this movie. Trills, a healthy dose of percussive tricks, tremolo strings, and electric violin and organ are some of the musical effects used to bring the tale to life.

A great companion piece to Kronos, the score for The Cosmic Man makes for a fun and creepy listening experience. This Monstrous Movie Music release not only contains the full orchestral score, but also cues not used in the picture and Sawtell/Shefter musical sound effects, too!

Because this is a two-CD set, Monstrous Movie Music is giving you two separate liner books, too, each replete with facts and trivia about the music. There are also photos of the music manuscripts from both scores. You can't consider yourself a science fiction fanatic unless you have the monstrous strains of Kronos and The Cosmic Man in your soundtrack library!