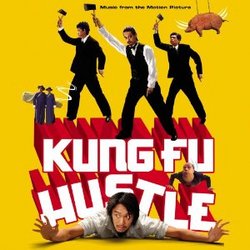 Question: how can you ever hate a movie the opens with a choreographed axe dance number?

Stephen Chow's follow-up to Shaolin Soccer is a delirious action/comedy homage to the Gold Harvest Kung Fu movies of the 70's. Kung Fu Hustle refers to literally dozens of Wuxia genre films while at the same time capturing the innocent spirit inside such escapist fare. The soundtrack album is a mix of traditional Chinese and classical music used to both comical and loving effects.

The story, in brief, is the battle between the notorious Axe Gang (represented by the infectious and brassy "Nothing Ventured, Nothing Gained") and the poor tenement dwellers of Pig Sty (the pastoral "Fisherman's Song of the East China Sea"). The movie's moral is about the hidden potential within even the meekest of people. Multiple times in the film, seemingly ordinary characters explode into action, with the full accompaniment of traditional music. Such as the first fight in the courtyard ("Decree of the Sichuan General") or the first bold move that the Beast makes ("Daring General") or when Chow finally shows his true colors (the repeat of "Fisherman's Song"). Whether a character is good or bad, their physical expressions are an outcry of joy ("Ying Xiong Men Zhan Sheng Le Da Du He"). It is a very theatrical effect, but it emphasizes a child-like exuberance. Classical music is used in the high speed road-runner style chase ("Allegro Molto Vivace" from "Zigeunerweisen, Op. 20") and for the break into the insane asylum ("Sabre Dance"). When someone uses Aram Khachaturian's "Sabre Dance," you know they aren't taking themselves too seriously.

Hong Kong mainstay composer Raymond Wong fills in the gaps between these elements, writing plenty of modern action cues. His elegant tracks "Midnight Assassins" and "Blade of Q" dramatize the workings of the deadly string weapon used against the heroes. His highlight is the climatic "Buddhist Palm," where after holding in his compositions for the whole movie, he explodes orchestral fury. My singular complaint about the album is that more of Wong's score has not been included.

After going through the album again, one realizes how the selection of the music is so essential to the movie's success and this is an album where the joy of the film spreads completely to the listening of the score. An absolute delight.