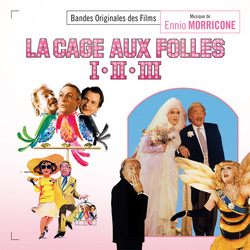 La Cage aux folles (Birds Of A Feather) is a 1978 Franco-Italian comedy film based on a 1973 play by French actor Jean Poiret. It is co-written and directed by Édouard Molinaro and stars Ugo Tognazzi and Michel Serrault. The film was followed by two sequels: La Cage aux Folles 2 also directed by Molinaro, and La Cage aux folles 3: The Wedding (1985), directed by Georges Lautner.

Between emotion and light-heartedness, austerity and glitter, seriousness and irony, Ennio Morricone's music for the three Cage aux folles is one of his most sympathetic works. This diversity is precisely what makes these scores so powerful and enables them to add their own layer of craziness to the films.

Supervised by Claudio Fuiano and newly restored by Christophe Hénault, this present edition features the three previously released programs approved by Ennio Morricone. The 12-page booklet features an essay by Nicolas Magenham discussing the films and the scores. The release is limited to 500 units.