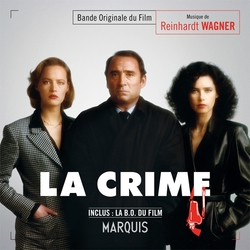 La Crime is a political thriller and tells the story of a police commissioner (Claude Brasseur) who is determined to track down sources of corruption that reach up to the higher echelons of government with the assistance of a dedicated female journalist (Gabrielle Lazure). Reinhardt Wagner provided a very effective and terrific score which features a memorable main theme with wordless vocalization. The composer offers a richly enjoyable mix of 80s-inspired soundtrack scores.

Marquis is loosely based on the life and writings of Marquis de Sade. The cast consisted of actors in period costumes with animal masks, with a separate puppet for de Sade's anthropomorphised "bodily appendage." In a nod to Nino Rota, the score mixes Baroque music with a mix of strange instrumentation (syncopated voices, electronical sounds…).

This present edition features the remastered original LP program for La Crime (previously issued by General Music) and the previously unreleased score to Marquis. The 8-page booklet features an essay by Nicolas Magenham discussing both films and scores based on an original interview with the composer.