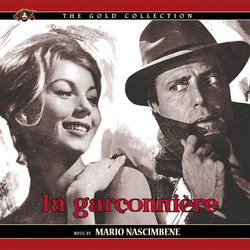 The music for La garconniere was written by Mario Nascimbene, one of the best known Italian film soundtrack composers of the 20th century. Nascimbene's music for La garconniere was written for a small band consisting of flute, trombone, trumpet, vibraphone, organ, acoustic and electric guitar, cello, drums and percussion. It is an intimate and sensual Italian jazz score with moments of suspense and emotional turbulence, working in total harmony with De Santis' picture, bringing more to life the psyche of the characters but also the atmosphere of their surroundings. The music was conducted by another big name of Italian film scoring, Maestro Gianni Ferrio!

In 1960 Italian RCA had released a 7" 45rpm vinyl containing four tracks from the score. Fifty-five years since the release of the film have passed and we are very proud to finally present the complete version of this beautiful soundtrack by Maestro Nascimbene.