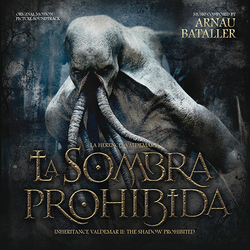 The follow-up to his acclaimed score for the Spanish fantasy horror film La Herencia Valdemar, Arnau Bataller's large symphonic score for La Sombra Prohibida is an impressive gothic tour-de-force that represents some of the most exciting music we've ever released on the MovieScore Media label.

Fans of Lord of the Rings will definitely feel at home in the dark orchestral and choral surroundings of La Sombra Prohibida, a score that expands upon ideas introduced in the first film but also introduces a lot of new material, including some very well-crafted action music.

We have released many impressive scores by Spanish film composers and this is yet another proof of the incredible vigeur and class of the current film music movement in this country of passion and colours.