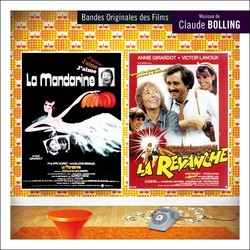 Limited edition of 500 copies.
First time on CD.
58 minutes of music, including 30 minutes of music never released before.
8-page CD booklet with French and English liner notes by Gilles Loison.

For La mandarine, Édouard Molinaro made his choice on Bolling who composed a very charming score. A happy coincidence as, in the process of filming the director had used a song by the French girl group Les Parisiennes entitled "Le temps du lumbago" performed by the female cast. The romance is presented through a beautifully lyrical love theme performed as a wordless song by Éliane Varon and its variations throughout the score. Some cues in the 1970's vibe is always present. This newly remastered version presents the same LP record program (released in 1972 on RCA Records).

In La revanche, the tone is provided by a small jazz troupe (with top-notch jazz soloists) who deliver a light and jumpy theme dominated by flute, piano and trumpet. The flute is indeed an essential component of Bolling's score. Five in number, they dialogue continually with the piano, the bugle and the trumpet to produce a series of sweet and gentle cues. Only one theme from La revanche was before released on a CD compilation. Music Box Records releases now a complete edition including all the music written and recorded by Claude Bolling for the film.