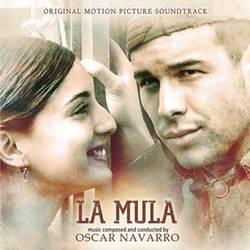 One of the most lush and broadly romantic scores written for a European film in recent time, Oscar Navarro's score for La Mula, starring María Valverde and Mario Casas, has been nominated for the prestigious Hollywood Music in Media Award and we are sure this is not going to be the last award nomination Navarro gets for this, his first major feature film score. It's firmly rooted in the best of film music traditions and recalls the great epic romantic scores by such beloved composers as Maurice Jarre and John Williams.

La Mula's thematic richness and carefully orchestrated setpieces, all rooted in a melodic tradition full of passionate Spanish vigour, will be a fan favourite as well as a sought-after soundtrack for fans of the film itself where the music has a prominent role. The orchestral performance and solo parts are beautifully phrased throughout this recording.