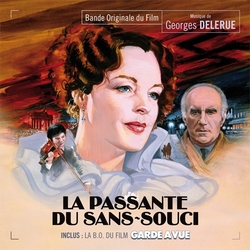 For La Passante du Sans-Souci, Delerue wrote a main theme on violin with undertones of Klezmer, bringing to the film a dramatic dimension. This theme is reprised as a song in the final credits (Chanson d'exil) and its many variations appear in several cues throughout the score.

For Garde ŕ vue, Delerue wrote a very short effective score for this psychological thriller. The main theme takes the form of a carnival waltz.

This new album devoted to two scores by Georges Delerue allows the listener to hear two sides of his writing: the one dramatic and sentimental, dominated by strings, the other darker and more disquieting. Oscillating between the sadness of adults and the fears of children, this album gives resonance once more to the wide palette of a composer with many facets.

This present edition has been fully remastered from the original master tapes which contain the previously issued LP programs. The package includes an 8-page booklet with liner notes by Sylvain Pfeffer, discussing the films and the scores.