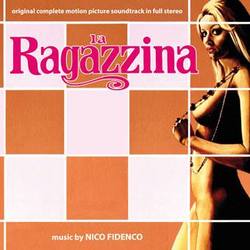 Nico Fidenco composed a lovely OST, most certainly inspired by the young and beautiful Gloria Guida. In this OST, romantic melodies alternate with dance melodies popular in clubs in the mid-1970s. Edda Dell'Orso performs solo and her exceptional voice creates a sweet and magical atmosphere.

Previously C.A.M. had released a promotional LP with 15 songs in full stereo (C.A.M. CAM CML – 068), which we rereleased for the first time on CD in 2007. After finding the original recording session in full stereo, we were able to add about 18 unedited minutes. We discovered that the speed of the only master album available had been slowed down when we compared it to the current master tape used for this release. We've also added the songs "Why Are You Running Fast" and "The Flag," performed by the group "La Rosa Dei Venti, which was released only as a rare single Erre RR 3066. We used this single as our source because the original single master tape is lost forever and even after an adequate restoration, the quality of the sound was not comparable to the rest of the CD.