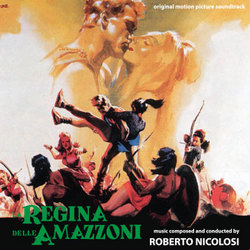 Digitmovies continues its adventurous trip through the world of Italian Peplum by releasing the OST by Roberto Nicolosi from the film La Regina delle Amazzoni. This OST has never been released on CD before and is found under Volume XXXII of the series.

This CD was made possible thanks to the mono master tapes from the recording session which were kept in excellent condition. Robert Nicolosi composed and directed a symphonic OST containing all the classical elements of Peplum, but with an interesting idea. The main score is modern (for that time period), but there are hints of blues, jazz and swing, which the composer dances between again and again. This creates a soundtrack with two dimensions. In one the orchestra performs dramatic and heroic passages, and in the other the rhythm section creates the atmosphere of 1960 where gentlemen's clubs with dancing and strippers were commonplace.