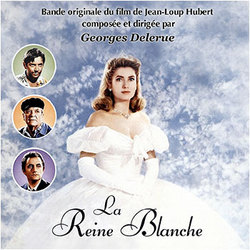 For the love drama La Reine blanche, one of the very last films he scored, Georges Delerue (1925-1992), delivered a main theme played at the accordion that expresses the sense of melancholy that haunts the main characters. This recurring air, which unfolds slowly, as does the pace of life in the village, is given a few interesting variations as the plot progresses and the dramatic issues become clearer.

Elsewhere, one can find some similarity with the strings' music Delerue composed the year before for the romantic comedy Joe Versus The Volcano. There is above all a breathtaking theme heard in a crucial scene, when Deneuve puts the white dress on that helped her win a beauty contest two decades earlier.

Our remastering of La Reine blanche highlights some pieces that are usually considered of secondary importance: background and dance music, It is very successful and diversified, as several scenes of the film take place in cafes, bars, at carnivals and popular dances. These utilitarian pieces show here an unmistakable signature, proof that Georges Delerue spared no effort to adorn the film.

The film uses several songs of the era, like Mon Amant de Saint-Jean, which was on the original Polydor album but which we didn't feel necessary to include here. The only other change in the content from that first release is the grouping of two very shorts pieces: Le retour / Jean.

This limited edition of 750 copies is licensed from TF1 in France. 8-page bilingual color booklet.