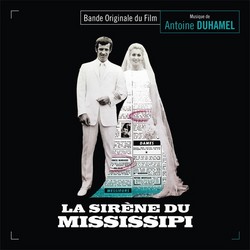 This edition presents the complete original score for Mississippi Mermaid with more than 50 minutes even though only 25 minutes were kept in the original film version. The film's music is superb for its orchestral-driven score that has some serene moments but also some eerie moments for the film's suspense. Antoine Duhamel also heightens the Hitcockian vibe with his Bernard Herrmann-inspired score with its jagged and anxious strings, recalling a certain atmosphere from Psycho or North by Northwest.

In collaboration with MGM, Music Box Records presents the newly remastered reissue of the complete score for Mississippi Mermaid, featuring the same content previously issued by Milan Records in 1991. The CD comes with an 8-page booklet featuring liner notes by Gilles Loison who discusses the film and the score. The release is limited to 500 units.