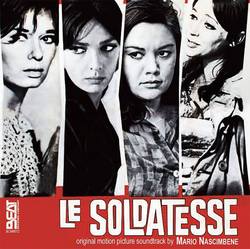 Beat Records releases for the first time on CD two scores that highlight the versatility of Mario Nascimbene, one of the biggest names in international film music. For Le soldatesse, Greek bouzouki music is essential, of course, but very powerful, alternated with dramatic symphonic passages. In addition to the material featured on the promotional mono RCA 33 rpm album of that period, we discovered on the original master tapes that the soundtrack was also recorded in fabulous stereo sound, which we include here for completeness.

Vado a vedere il mondo, capisco tutto e torno highlights the cheerful, romantic side of Maestro Nascimbene, who wrote the playful theme song "Swing Swing" in both a vocal version and in catchy instrumental versions with a groovy beat. A couple of tracks also feature the legendary Franco De Gemini on harmonica.

Now available in our BCM series with a 12-page booklet designed by Alessio Innuzzi using original key art, with liner notes (in Italian and English) by Pier Maria Bocchi and mastering by Claudio Fuiano.