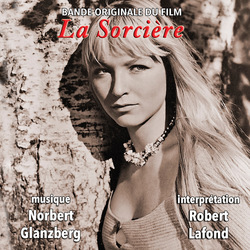 Norbert Glanzberg (1910-2001) received classical training while immersing in the popular music of his native Poland. Persecuted by the Nazi regime during the Second World War, Glanzberg migrated to Paris where he became a prolific composer for popular singers like Edith Piaf. In parallel, he worked as a composer for the screen, writing about thirty film scores from 1938 to 1968. La Sorcičre (The Blonde Witch aka The Sorceress) in 1956, starring Marina Vlady and Maurice Ronet, remains the best known. A DVD-R release with English subtitles in USA gave a well-deserved second life to this French movie.

La Sorcičre is about the idyllic relationship between Laurent Brulard, a French engineer assigned to a construction site in Sweden, and the young girl Aino, who lives in the forest with her aunt. The superstitious villagers attribute supernatural powers and an evil influence to the two women. During his walks in the forest, Brulard meets Aino and soon falls in love with her. He puts a lot of effort into approaching the isolated young girl and convincing her to get closer to the community, but things will go wrong.

However, this tragic story provides us with many poetic and even joyful moments. Norbert Glanzberg makes the most of the bittersweet plot. He delivers a memorable love theme, performed mainly on flute and strings. The rest of the soundtrack to La Sorcičre, brilliantly recreated by Robert Lafond, is just as interesting because Glanzberg knew how to write for a large orchestra as much as for the voice.

To complete our program, we have included the full content of the soundtrack EP release to Les Bateliers de la Volga (Prisoner of the Volga), a 1959 drama directed by Viktor Tourjansky. Although the traditional Russian repertoire is very present in the score, the composer's style is reflected, especially in Les yeux de Natasha whose romanticism recalls some passages of La Sorcičre. This 38-minute limited edition CD comes with an 8-page booklet with as usual bilingual liner notes by producer Clément Fontaine.