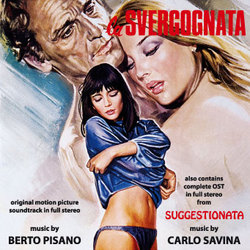 The main themes are reprised for piano solo in Tr.2 and Tr.6. The atmosphere of apparent relaxation in the Ischia hotel is transmitted through Pop themes for Hammond organ and rhythmics : Bass flute version in (Tr.3), faster with Bossa tempo (Tr.8). In the RCA archives the stereo master tape of a very rare promotional album has survived which had been issued in 1974 on the Pegaso label (PG 13) and which more or less contains all of the music that was recorded for the movie.

Still remaining in the erotic genre, mixed with some noir elements, we also include as bonus tracks the complete OST in full stereo by Carlo Savina from Suggestionata. Carlo Savina has written the music score for a plot between erotism and noir which is now released for the first time from the stereo master tapes of the RCA Archives. Savina has composed a romantic theme with pop arrangement and vocalized by a young female voice, introduced in the Main Titles (Tr.10), then elegantly reprised with electric piano and orchestra (Tr.11,Tr.14,Tr.16), faster in Tr.12, more softly in Tr.13 and then in the End Titles (Tr.20).The main theme is reprised in a suspense key (Tr.15,Tr.17,Tr.18) and there is dramatic music of a Progressive kind in Tr.19.