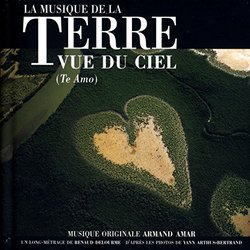 In 2000, a French photographer, Yann Arthus-Bertrand, presented an exhibit (and subsequently released a book) of his aerial photos taken from around the world. The work presented a striking view of mankind's relationship with the earth. Filmmaker Renaud Delourme made a short documentary about Bertrand's photos for which Amar Armand composed the score.

The score to the documentary (Earth From Above) clearly stands on its own. Since the film is comprised primarily of still photos, there are no major concerns with rhythms or timing within the film itself. Armand's score succeeds because of the solemn mood he creates to accompany the photos. To create the music Armand used only a handful of musicians and vocalists. The score is dominated by evocative strings, piano and wind instruments. With the addition of haunting vocals in different languages, the score becomes more of a meditative world music collaboration. At times it is reminiscent of the score to Baraka, another documentary exploring man's role in this world.

The first cue, "La Genese (Genesis)", effectively sets the mood for what follows. Mid tempo strings accompany a female vocalist singing in an ancient Armenian dialect followed by the mournful sound of the doudouk. A piano-based melody recurs throughout the longer cues and helps establish the theme through the entire work. While most of the cues are somber and reflective, there are a few ("Babel", "L'orage Et La Baleine") which move along in quick short bursts of melody. Even some of the longer cues occasionally segue into fast tempo string movements which possess a Phillip Glass-like quality, recalling his work on Koyaanisqatsi.

The album as a whole is a good solid listen. But there are two missteps. Two cues, "Save Us" and the last half of the title track, have some spoken word bits which are quite unnecessary. It's as if the people behind this project didn't trust their audience to understand what they're getting at. If the photos (some of which are included in the booklet) and the music are unable to effectively convey the point, then no amount of words is going to do the job. It simply cheapens it.

This minor complaint doesn't take away from the overall quality of the album, nor should the unfamiliarity of the project dissuade anyone from looking into it. The music is very much in the same vein as Lisa Gerrard and Phillip Glass. It's similar but treads its own ground. Recommended.