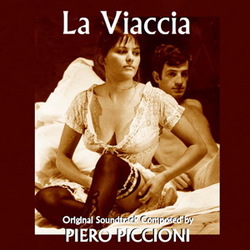 Piero Piccioni composed in 1961 La viaccia with a soundtrack with melancholy phrases played by an unaccompanied English horn, sombre dissonances and long sustained chords in the lower registers with only a faint light of hope when a high flute phrase, music full of unresolved tension. On the other hand his subtle and delicate melodic lines in a characteristic setting for solo saxophone and strings arouse sympathy. The source music cues were also composed by Piccioni and with their carefree and charming nature stand in total contrast to the doomladen atmosphere of the dramatic underscoring. With his emphasis on jazz elements on the one hand and his impressionistic colourings on the other hand he had already opened the doors to new soundscapes within traditional Italian film music.

He even used the opportunity to adapt the Rhapsody for Alto Saxophone and Orchestra which had been composed by Debussy, which give the film its inimitable flavour, an autumnal mood conjured by the mourning and haunting symphonic music. Most of tracks have never been made available before and are presented on this disc for the first time ever. This CD is therefore a testimony to the versatile talent and exceptional artistry of Piero Piccioni.