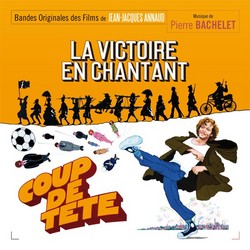 In collaboration with Emi Music Publishing and Tele Music, Music Box Records is pleased to present on CD the collaboration between Pierre Bachelet and Jean-Jacques Annaud, with original soundtracks from the director's first two films: La Victoire en chantant (1976) and Coup de tete (1979).

Through its simplicity and utopian naivety, the main theme Bachelet composed for La Victoire en chantant bears an ironic stance towards its own rhythm, a military march which is ridiculously over-emphasized, personifying all of the gravitas displayed by the colonists. This present edition recreates the original LP program which was only available on the American label Buddah Records in 1977 and also includes an unreleased version of the end title as a bonus track.

For Coup de tete, this newly remastered edition features for the first time all the score written for the film and includes an unreleased version of the main title as a bonus track. The score is based on this unforgettable tune whistled by Pierre Bachelet himself, and its many well-crafted variations. Bachelet's whistled pieces are not exactly bellicose, but on the contrary, rather aimless, navigating with detachment upon a melody that is simple and sweet.

The limited edition of 350 units comes with an 8-page booklet with French and English commentary by Nicolas Magenham.