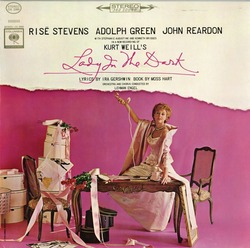 Lady in the Dark

With book by Moss Hart, lyrics by Ira Gershwin and music by Kurt Weill, this psychological musical opened on January 23, 1941, to thunderous applause at the Alvin Theatre in New York, and enjoyed a respectable run of 407 performances, in spite of the fact that—like Pal Joey—it broke the traditional mold of Broadway shows at the time.

The story of a stylish fashion magazine editor undergoing psychoanalysis, it starred the radiant Gertrude Lawrence, with Bert Lytell, Macdonald Carey, Victor Mature, and Danny Kaye as the four men of the four dreams that haunt her. The multi-tiered structure, in which each song is part of a particular dream, gave Weill the opportunity to write two of his most memorable compositions, "The Saga Of Jenny" and "My Ship." Gershwin's sophisticated lyrics included the tongue-twister "Tschaikovsky," which would become a runaway hit single for Danny Kaye.