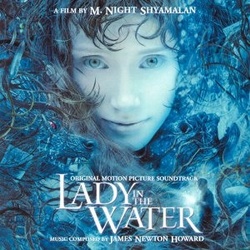 Lady in the Water

Review: Lady in the Water

While the films of M. Night Shyamalan have been mixed in critical reaction, one aspect in which they rarely fail is in the music. Having employed James Newton Howard for the past four films (The Sixth Sense, Unbreakable, Signs, The Village), it\'s not surprising that Shyamalan would call upon Howard again for his latest film, Lady in the Water. Set up as a real-life bedtime story, the film is about Cleveland Heep (Paul Giamatti), the superintendent of The Cove (an apartment complex in the outskirts of Philadelphia) who has buried his tragic past, and his encounter with Story (Bryce Dallas Howard), a "Narf" (sea nymph) from The Blue World sent on a mission to re-establish contact between her world, and the world of man. The plot is full of self-fulfilling prophecies, and at times it feels as though Shyamalan is making up the story as he goes, but through it all, Howard\'s score rises above the clutter and confusion to provide a tender, emotionally moving work that is easily one of the best scores of the year to date.

The album, released by Decca Records, begins with "Prologue". Utilizing a soft female choir, lush strings and brass, and a piano, Howard builds sets up the two main themes heard in the film - the emotional Blue World theme, and the dark descending theme for the Scrunt, a fierce beast determined to prevent Story from fulfilling her mission. We hear these two themes throughout the album, most notably in the climax of the score.

The cues vary in shape and tone. "The Party" is tense and lumbering, slowly building as it goes, with lots of orchestral textures, and "Walkie Talkie" has a Signs-like descending motif that builds through the track. "The Blue World" has a mysterious edge that appropriately underscores Cleveland\'s exploration of Story\'s world beneath his swimming pool, including a rather anxious moment where he starts to run out of air. It reminded me a bit of Howard\'s score to Atlantis: The Lost Empire, a comparison that would re-emerge again towards the end of the disc.

There is also plenty of emotional material, such as in "Charades", where Story answers questions regarding her mission. A pleasant flute line is heard in this track (and repeated in "Officer Jimbo"), as well as tender versions of the Scrunt theme and the Blue World theme (with choir). "Ripples in the Pool" presents us with a clarinet and flute-based version of Cleveland\'s theme, which isn\'t really heard again until the "End Titles", but it\'s a sparse yet effective melody. After Cleveland\'s exploration in "The Blue World", he brings the Kii to Story ("Delivering the Kii"), in a track that starts off with a string and piano version of the Blue World theme.

"Cereal Boxes" has the same energetic sense of wonder that we heard in "Charades", and the last three score tracks all blend together, starting with "The Healing". The biggest and most exciting track on the album is easily "The Great Eatlon", which covers the climax of the film. We hear rousing versions of the two major themes, and use of choir is wonderful, and a burst of Atlantis-like brass in the middle heralds in a bit of action to boot. The track ends with an extremely soft female choir, which leads right into the "End Titles".

There are four songs at the end of the album, all of them covers of Bob Dylan songs. Only three of them appear in the film. A Whisper in The Noise does a creepy, watery cover of "The Times They Are A-Changin\'", and Amanda Ghost does "Every Grain of Sand". Both of these songs feel otherworldly enough to fit with the rest of the album, but the last two don\'t. Silvertide plays a very modern hard rock - dare I say "angry" - version of "It Ain\'t Me Babe" (not in the film), followed by a retro 70\'s rock version of "Maggie\'s Farm", which is used in the film during Silvertide\'s brief cameo during the party scene. It\'s most likely that film score fans will stop the album when Howard\'s music ends, but I\'d suggest holding off until you finish the first two songs.

Although there is a bit of music missing from the score, it doesn\'t feel too short. By sequencing the album out of film order, it plays nicely as a listening experience. If there was any major complaint about it, it might seem that there is some repetition in some of the material - but it\'s all so enjoyable that you really wouldn\'t notice. Throughout all 42-minutes of score, you can definitely feel the quality and care that Howard has put into the work. He did what all composers strive to do: not just support the film, but actually elevate it. There are plenty of instances where a score is much better than the film it was written for (just ask Jerry Goldsmith), and The Lady in the Water is one such example. It\'s a shame though, since scores for films that don\'t get critical approval rarely are remembered during the awards season, and Howard\'s score is easily worth consideration - and a must-have for any film music fan.