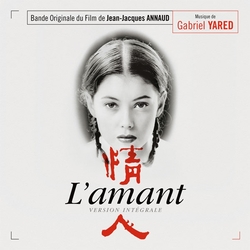 In collaboration with Pathé Production, Music Box Records presents the remastered and expanded 25th anniversary edition of Gabriel Yared's score to the 1992 drama film L'Amant (The Lover), starring Jane March and Tony Leung, and directed by Jean-Jacques Annaud (The Name of the Rose, Wolf Totem).

The timeless score swings between delicately sensual pieces and more abrupt compositions. It evokes two aspects of the girl's universe: her carnal desire, and the unsettling discovery of her sexuality. The main theme is used in various arrangements all through the movie, mainly played by strings, a solo clarinet and with very delicately-played piano notes. Gabriel Yared also wrote the source music of the film.

L'Amant was issued on CD around the time of the film's release, it included 42 minutes of music organized into 16 tracks. The current release has been fully remastered from the recording session tapes and adds about 20 minutes of brand new material organized into 24 tracks. The sound has been also greatly improved. The 8-page booklet by Sylvain Pfeffer discusses the film and the score based on an original interview with the composer and the director.