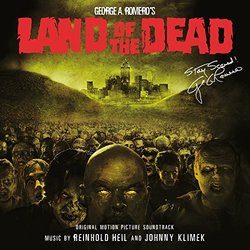 Land of the Dead

Review: Land of the Dead

Fans of film scores are a passionate lot. We\'re here because we feel strongly about this music genre. In many ways our passion is fueled by the passion that drives talented composers to create memorable music. That\'s why we\'re here. We\'re equally passionate when a score fails to support the images, story and ideas presented on screen. Love \'em or hate \'em, we feel strongly about great scores and terrible ones. But what to make of music that is merely adequate? In my book, nothing is worse when artists don\'t try and are content to settle for mediocre.

There\'s a lack of passion.

George A. Romero made a hearty comeback this summer with another strong entry in his zombie oeuvre. While Land of the Dead is more polished than any of his previous films, there\'s no mistaking a Romero zombie flick for any other. It\'s refreshing to see a director like Romero building upon the zombie mythos he created in his earlier three films and still throwing in his social commentary about our world. It would\'ve been so easy to rely on the tried and true or, worse, try to play catch-up with today\'s expectations of a zombie film. There may not be a whole lot of it, but there\'s no mistaking that there\'s passion in this film.

Which brings us to the album at hand. Heil and Klimek\'s score is merely adequate. Does it work in the movie? Sure – more or less. Is it something you\'re going to listen to? No. It\'s a score with no personality or identity when the movie is anything but. For a score stretched over 73 minutes, it\'s amazing just how forgettable it all is. Say what you will about the music in Romero\'s other zombie movies (tracked from library source cues and cheesy synth), but at least they were memorable. What Dawn of the Dead fan can\'t hum the circus-like mall music played during the end credits of that movie?

Most of the score consists of rhythmic percussive synth cues and stingers laid over simplistic ominous tones. Since the cues average 2 minutes in length and are scene specific, there is no room to build up action cues or thematically link one scene to the next. The basic components of a good score are missing. If all that was required for the score was to provide a metronome for the editors, then the score works fine because that\'s all it is.

There is one small redeeming factor within all this. A simple three note piano motif pops up here and there to provide some humanity in this soulless score. "Mercy Killing" actually begins very promisingly with a note of sad fatalism before segueing into the usual noise and then switching back to a solemn tone. It\'s promising and one wishes there were more cues like that through this tedious album.

Is there an audience for this score? Yes, I believe there is: film editors. Devoid of themes and identity, it should make for great temp track music for action flicks for years to come.