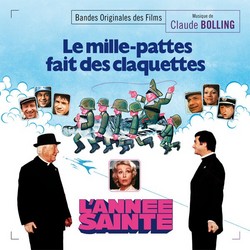 For L'Annee sainte, Bolling has composed a very nostalgic score by using a harmonica for the main melody. The music alternates between cool sound of the seventies (electric guitar and drums), parodic church music (organ) suspenseful and psychedelic moods (flute, wah-wah guitar) and his brilliant use of jazzy vibe.

For Le mille-pattes fait des claquettes, Bolling has written a score with eclectic moods between big band music and a military march, essential components of any good film that has the Second World War as backdrop.

Limited to 350 units, this release has been fully remastered from the session tapes and includes an 8-page booklet with liner notes by Gilles Loison, discussing the film and the score.