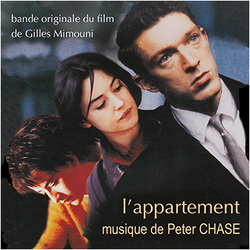 This very first release of the soundtrack composed by Peter Chase for The Apartment will satisfy all lovers of orchestral scores that distill a haunting and mysterious atmosphere while offering high melodic content. The music accounts for much of the success of Gilles Mimouni's erotic-romantic drama, edited in the style of a thriller.

The Apartment had a remake in 2004, Wicker Park, but a majority of viewers claim to prefer the French version. The approach of the two works regarding the soundtrack differs completely: while Wicker Park relies mainly on disparate pop songs, The Apartment benefits from a superb original score by Peter Chase, performed by the Moscow Philharmonic Orchestra, conducted by Konstantin Krimetz.

The 8-page booklet includes French and English liner notes by CD producer Clement Fontaine. This limited edition of 500 copies was prepared in collaboration with Peter Chase.