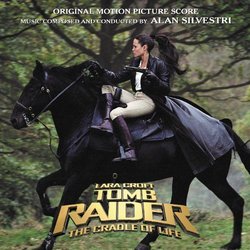 Lara Croft Tomb Raider: The Cradle of Life is a bad movie.  It's very bad.  It's not "so bad it's good," it's just bad.  It's disjointed, uninspiring, and contrived.  It's not even a collection of good fight scenes folded into a bad movie.  It's a collection of bad scenes, barely linked together with a Swiss cheese plot that, at various times, contains imaginative moments.  These moments are rare, fleeting, and barely redemptive.  For those who care to know, however, the "plot" is that Lady Laura Croft (Angelina Jolie) is tasked with finding Pandora's Box.  Once opened, the box will release a plague across the planet, killing everything and everyone.  Of course, some maniac arms dealer played by Ciaran Hinds (The Sum of All Fears, Road to Perdition) wants to find the box first and sell it to the highest bidder.  In the meantime, Lara jumps from tall buildings, fights with all types of weaponry, drives a Land Rover, and engages in semi-romantic-interludes with her former lover, Terry Sheridan, played by Gerard Butler (Tomorrow Never Dies, Reign of Fire).  Yes, in case you're wondering, you've already seen this movie – done far better – many, many times.

The score, though, is a different story entirely.  Composed by Alan Silvestri, it is better than the film itself both on a substantive level, and for the simple fact that it is astoundingly more cohesive than the film for which it was written.  The music begins with the pumping rhythms one typically associates with a Jan de Bont film (Speed, Twister, Speed 2) in "Opening".  This kind of techno-driven music reappears from time to time throughout the score, ("I Need Terry Sheridan" and "Flower Pagoda Battle"), but it doesn't dominate.

Fortunately, Silvestri spent most of his time infusing the music with the magical elements found in "The Luna Temple" and the slightly cultural cues found in tracks like "Arrival in China".  Silvestri has shown a great deal of range on this score, as "The Luna Temple" and "The Cradle of Life," which sound like a mix of Indiana Jones and Star Trek, demonstrate.  I would point to The Mummy Returns as a not-so-distant cousin.  He does an interesting job of mixing influences from Thomas Newman (Red Corner) to Mark Mancina (Return to Paradise) to John Williams (Indiana Jones Trilogy), and weaving them together successfully.  Of course, considering that at this point in his career Silvestri has scored over 100 films, success shouldn't come as a surprise.  What does come as a surprise is that he poured so much of his talent into such a waste of celluloid.  And even more surprising than that is that even Silvestri's considerable talents couldn't save the film from its own embarrassing self.  But considering he was unceremoniously dropped from Pirates of the Caribbean, and replaced composer Craig Armstrong on this film, it's somewhat surprising he was able to pull off as good a job as he did.  But I digress…

One of the true joys of this score is that although it adopts some of the technotronics currently in vogue, it stills pays homage to the adventure scores of years past in which the music was a cue to the audience not to just "get pumped," but to behold in awe what was happening on screen ("Orb Transmission" and "Pandora's Box.")  In this case, of course, what was happening on screen created no sense of awe, but Silvestri did his damndest to fill the void.  "Pandora's Box" practically had me in tears just listening to it, but in the film the scene was laughable - note to Jan de Bont: this is not a good sign.

This is one of those times when the film did not live up to the promise of the music that was accompanying it.  Moral of the story?  Buy this soundtrack, listen to it, enjoy it, and let the scenes play out in your imagination, for that will be immeasurably more entertaining than if you watch the movie.