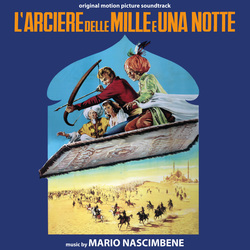 For L'Arciere delle mille e una notte, Mario Nascimbene wrote a brief symphonic OST, dominated by an epic main theme for the young protagonist Hassan. The whole story is highlighted by magical and adventurous themes with an orchestra and a choir. In the background music the author intervenes with electronic effects that create the atmosphere of Arabian Nights .

Nascimbene composed background music based on the main theme of La lotta dell'uomo per la sua sopravvivenza. The series contained pieces of repertoire, segments of Mixerama, an instrument invented by the composer in his study La Meridiana in Rome, as well as original music that unfortunately was not possible to locate. On the stereo master tapes of the recording sessions, we are honored to have found four surviving tracks of great artistic value. There were four versions of "The Fight for Survival" including the version from the opening credits, one in slow tempo, one in shake interpreted by the beautiful voice of Shirley Bassey and accompanied by the Folkstudio singers choir, and an instrumental version. For fans of Shirley Bassey and James Bond it is undoubtedly a great recovery.